I don’t know how to write about it so I’ll just put down words and see if they make sense.

I think there are money changers in the temple that is me. Yeah..how’s that for a start? 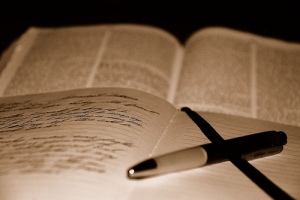 Every time I walk into my prayer room that hasn’t heard much prayer lately, I see my prayer journals that haven’t been written in much lately, sitting on the table. They stare at me. I stare back. Sometimes I stick my tongue out at them and walk away. I am a prayer-less woman with a prayer room and prayer journals. And guilt. Lots of guilt. Because I love prayer and I know the power of it, I know the importance of it and I haven’t been very engaged in it.

But God. He’s not one to just let a thing go now is He? He stares too, just like those stupid journals and I haven’t the nerve to stick my tongue out but I do walk away. But then there is my bible, sitting open right next to my keyboard. Open to this passage…

“When it was almost time for the Jewish Passover, Jesus went up to Jerusalem. In the temple courts he found people selling cattle, sheep and doves, and others sitting at tables exchanging money. So he made a whip out of cords, and drove all from the temple courts, both sheep and cattle; he scattered the coins of the money changers and overturned their tables. To those who sold doves he said,’Get these out of here! Stop turning my Father’s house into a market!’ His disciples remembered that it is written: ‘Zeal for your house will consume me.'” John 2:13-17

While there are probably several reasons for Jesus’ anger, I believe the fact that they were in the temple courts, the only place the Gentiles could pray, is one of them. In the other gospels Jesus is recorded as saying that His Father’s house is to be a house of prayer. The money changers were in the place of prayer.

And then this came to mind…

“Don’t you know that you yourselves are God’s temple and that God’s Spirit dwells in your midst?” 1Corinthians 3:16

And that’s when the thought seeped it’s way into my frontal lobe.

“I think I have money changers in the temple.”

Things that have set up shop in the place they should not be, in the place of prayer. I can name a few of them.

Complacency. Fear. Worry. Unbelief. Busyness. Escape.  I’m sure there’s more. Maybe some of them are even good things that have taken the place of the better thing. My money changers.

And you know what grieves me the most? It isn’t just that I have stopped interceding for other people, or that my journals have empty pages.

It’s that I’ve stopped talking to my Father. That’s why I wept tonight. Because I know He desires to hear my voice. He leans in for it. I know He waits for me to cry out to Him, to come to Him. He waits to answer what I’m not asking.

So I think there are some tables that need to be turned over. I think a little zeal is in order.

Thanks for letting me talk all of that out. It may not have made much sense to you, but talking about it helped me. Thanks for listening.

6 thoughts on “my money changers”