bringing down an idol

It came unexpectedly, as it often does. She was praying a prayer of repentance for her idolatry. I was agreeing with her turning away when suddenly her voice faded and I was hearing God. And now, days later, I am still hearing Him and He is not speaking of her and her idolatry but of me and mine.

It began with a picture and the story of a king who demanded a bow. (Daniel, chapter 3)

“Whoever does not fall down and worship will immediately be thrown into a blazing furnace.”

” Therefore, as soon as they heard the sound of the horn, flute, zither, lyre, harp and all kinds of music, all the nations and peoples of every language fell down and worshiped the image of gold that King Nebuchadnezzar had set up.”

And in the midst of someone else’s prayer, God spoke to me. “They did not bow because of what they could gain, they bowed to avoid the consequences of not bowing. Fear, not the statue, was their idol.”

These are the fiery furnace that threatens us.

And so we bow.

And we call our idols by the names that are most familiar. Substances, marriage, people, money, plans, fame, isolation. We name them and determine to bring them down, to render them powerless in our lives.

And still, we bow. And the guilt and shame just about does us in.

But I have heard the voice of God, and my heart has been bruised by Truth.

“Beloved, it is easy enough for my people to shout about how I am their deliverer. The words ‘God will’ come forth quickly, almost mechanically, and with much bravado. And yet, my people still bow.”

“My child, stop shouting at your idol about how your God will deliver you. The idol of fear does not fall with those words. It will fall with these:”

“But even if He does not, we want you to know, your majesty, that we will not serve your gods or worship the image of gold you have set up.”

Those words. Those are the ones that stick in the throat and reveal the truth of our devotion. And in this revelation, I am connecting the God dots, following the trail He has been leaving for me. Tracing bread crumbs back through everything I’ve written and finding the treasure of His love for me. And now here I am and His words are painfully sweet and crushingly beautiful, once again.

“I did not hang on a cross so that I could get something from you, but so that I could be with you. My devotion to you has never been about your performance, but about who you are.”

And I know what He is asking me with these words.

Are you devoted to Me because you believe I will perform for you, or because of who I am?

He has pursued me over and over again, into this place of surrender. He has loved me beyond reason. And bread crumb by bread crumb He has led me to the knowledge that He will love me and pursue me and act in absolute devotion to me…even if. Even if I bow to fear and run away, He will pray that my faith will not fail. Even if I head off to wallow in the pigpen until I want to come home, He will wait and watch and run to me. His kindness toward me has left me shaken so many times. I have given Him every reason to turn away, to wash His hands of me, but He has remained. And I weep with the knowledge that it was not Him performing for me, but Him being who He is. I weep because I just don’t get it and I don’t think I ever will. I weep because His devotion to me is unmerited and I can’t get away from that truth. I weep because I have spoken words of faith and then bowed to the idol of fear too many times to count.

I weep because I’m tired of bowing.

I’ve read the story of Shadrach, Meshach, and Abednego many times, and every time was struck by the fact that Jesus was in the fire with them. I loved how they came out of the furnace without even the smell of smoke on them. I cheered at their deliverance. But the trail God has left for me leads me not to their deliverance, but to their devotion. In His love, He has led me to what brings down an idol.

It is not a white-knuckled performance. It is facing the consequence of not bowing, feeling the heat of the fire, and being devoted enough to God to say “even if I have to go through that fire, I will not bow”. That will bring down our idol. That’s when we will know that we have put nothing above God.

Father, I pray for deeper devotion. Take hold of my heart and sift it again and again until all that remains is wholly devoted to You. Strengthen me with a devotion that will refuse to bow, no matter what fire threatens me. Lead me always to the cross and may there, and only there, be the place that I bow my life until I am bowing before Your throne. 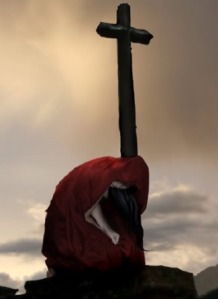 Oh, but deeper in me is something else, almost a shadow it’s so vague. But it’s there and I am compelled to give it my voice.

Beloved, there are days of another Nebuchadnezzar swiftly coming to us. In those days, it will not be her determination to perform, but her pure devotion, that will keep His Bride from bowing. When Jesus told Peter he (and the others) would be sifted (Luke 22), Peter spoke these words – words that sound like devotion:

“Lord, I am ready to go with you to prison and to death.”

But he bowed to the idol of fear, and he suffered the grief and sorrow of that bowing. The sifting revealed the limits of Peter’s devotion, and when he turned back, he turned with a devotion that strengthens us today.

And so I speak to all of us, to His Church, may we not simply utter words that sound like devotion, as we continue to bow to the idol of fear. May we allow a sifting to reveal the limits of our devotion so that we can know the sorrow of our bowing, repent, receive His forgiveness, and go into the days ahead refusing to bow to any but God.

2 thoughts on “bringing down an idol”